You know I’ve waited too long to blog when I have to sign back in to my dash. *sigh* Sorry for that. I got caught up in… you don’t want excuses, do you? No. Moving on.

A painting by Jean-Baptiste Greuze came across my path this week and it brought back a fun memory from college I thought I would share. It does not, I’m sad to report, involve booze, sex, or debauchery of any kind. My college experience was not like that of my protagonist, Mr. Emmett Henderson.

I studied vocal music education in college, got my degree, stood in front of a few classrooms and ran for the hills. But, the training for music education was an absolute joy. If only I could be a professional student…

But my lingering memory of those lessons came from a double bass player. He was well over six feet tall, solid, muscular, blonde-haired, blue-eyed. He spoke few words, and when he did, they were deeply resonant and lazy, laced with little emotion beyond boredom. If he didn’t have an outside gig, he drank heavily on the weekends, flirted heavily with my closest friend of those days–even in droll tones. He was very much a man’s man.

But during guitar lessons, my friend and I saw a new side of him. We all sat and dutifully tuned our instruments. You had to bend your ear to hear your specific instrument and now that god awful flat E string of your neighbor, but Eric… he had his own method. He placed the body of his guitar between his legs on the seat of the chair, lifted the neck to his cheek and began to 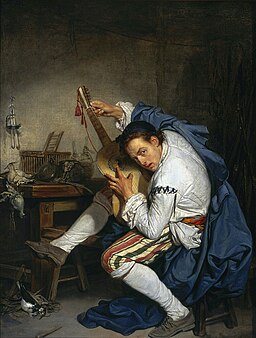 tune. In a manner we would have never expected from him, his touch on the instrument was delicate. His blonde eyelashes fluttered with each plucked string and then opened to a smile when his gentle twist of the tuning key would bring a proper pitch.

As my friend and I watched him that day, seeing this boy in a new light, she leaned to me. He had been trying to get her to go out with him for some time. Never rude necessarily, but certainly persistent. “If he touches an instrument like that… imagine… ”

They only went on two dates; friendship served them better. But, I will never forget Eric and the way he made love to a classroom guitar.

Black Dust, a story about two musicians given a second chance at love, comes out April 7–a week from today! It is now available for pre-order from Interlude Press. Enter for a chance to win a copy at goodreads until April 10.

Lynn
View all posts by Lynn →